Word "braces" heard for sure. And one of the most common opinions is that it is used only in adults or adolescents. Let's see if this is true.

Why are braces for kids better than plates?

A bracket system is a fixed instrument consisting of locks and archwires fixed on each tooth passing through these locks. If necessary, such a system has additional elements: springs, chains, buttons, etc. The installation of brackets for children takes place on the teeth for the entire duration of the treatment; you cannot remove them yourself. This is one of the biggest advantages of this system, since the treatment takes place continuously (if you do not miss scheduled visits to the orthodontist), because the great difficulty in treating children with removable equipment is the dependence of treatment on cooperation with the patient and his parents - will the child wear well a record? In addition, removable devices do not always have the technical ability to solve a number of orthodontic problems, in contrast to the bracket system.

At what age is it better to install brackets? In modern orthodontics, there are 2 time periods when we offer children to non-removable devices: 8-9 years, when upper and lower permanent incisors erupt and after all permanent teeth have erupted.

In children aged 8-9 years, orthodontists use partial brackets (apparatus 2 * 4), where brackets are placed on four permanent incisors and two permanent molars with an archwire and additional elements: springs, chains. Only 6 brackets on 1 jaw.

The indications for such treatment are often the reverse overlap of the lower incisors of the upper, pronounced overcrowding of incisors. The treatment by the plate in this case does not give the desired effect, on a partial bracket system this is corrected in 8-10 months. And it is important that not only the position of the crown part of the tooth changes, but also the position of the root, which will be the key to good stability of the result. In addition, along the way, we create additional space for canines and premolars, which often do not have enough space for teething at a later date.

Do you need additional orthodontic treatment in older adults? As a result, sometimes a partial bracket system is enough to avoid brackets during adolescence. However, in case of a serious pathology, when the child’s jaw is too small and the teeth are large, it is possible to repeat the treatment on the bracket system, but with all of the permanent teeth.

Most often, the full bracket system is set for children aged 11-14 years. This is the best time when you can solve almost all pathologies of the dental system (the exception will be those cases that clearly require maxillofacial surgery). At this age, using active growth of children, we can correct the expressed crowding, stimulate the growth of the lower jaw, correct the occlusion without extracting the teeth.

What are the risks to teeth when wearing a bracket system in adolescence?

The disadvantages of orthodontic treatment at this age are, oddly enough, also related to the age of the patients. This refers to the possible occurrence of dental caries and a low level of hygiene due to the lack of motivation for good cleaning for such a long time (usually about one and a half years). Caries that occur in adolescence, most often associated not with the bracket system, but with the growth spurt that accompanies adolescents. Growing annually by 10-15 cm, these patients have calcium deficiency, which leads to the emergence of the so-called "acute caries". This is also observed in patients without a bracket system. Adolescents undergoing orthodontic treatment are examined by a pediatric dentist with a DIAGNOcam laser diagnostics every 3 months and, according to our protocol, are made quarterly cleansing with applications of calcium and fluoride preparations. All this minimizes the risk of caries during this period

The article was prepared by Petrova EA, the orthodontist

Rate this material:
5
Take care of your child's health
&bnsp;
Request an appointment 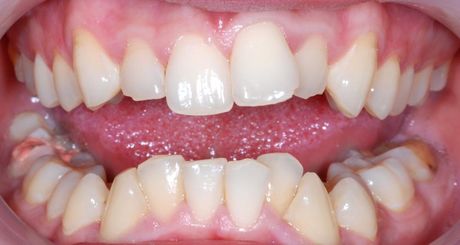 Clinical case 2. Correction of the aesthetics of a smile and severe crowding of the dentition.